Listen to Our Hearts?

One of my favorite songs to sing in worship is a song called “Listen to Our Hearts.” Many of you may be familiar with the song but if you’re not, let me explain it a little bit. The song expresses the idea that our words aren’t enough to truly express the love that we have for God. The song calls for God to listen to our hearts, since words will never be enough. It really is a wonderful message. However, maybe we need to be careful what we ask for.

When Jesus spoke with the woman at the well, he told her that correct worship is done in “spirit and truth” (John 4:24). That means, not only do we need to worship God in the way that he commanded, but we also need to make sure that our heart is in the right place. We are often careful to make sure we obey the first part of this command, but it is the “spirit” part we can have a hard time with. When we sing on Sunday mornings, are we only reading the words or are we careful to make sure that our heart is where it needs to be?

It is so easy to become distracted during worship and turn our focus away from God. Often we sing the words without even thinking about what it is we’re saying. We’ve sung the songs so many times, we are almost immune to the words. Perhaps it is time to refocus our heart to make sure that we are worshipping God in the way we are meant to. That way, when we ask God to listen to our heart rather than our words, there will be something for him to hear.

Our world has a bad case of “potty mouth” (that’s right, I just attempted to use that phrase in a serious tone). If you turn on the radio, chances are the song you hear has more “beeps”, “bleeps” and “blanks” than actual words. If you walk through any hot spot downtown, there’s a good possibility that you’ll hear words that would make your dear old grandmother cringe. In fact, even a lot of so-called kids movies and TV shows use language that can, at times, be over the line. And, like so many other problems of our world, this problem is not unique to those outside the church. There are many within the church who are beginning to let the world influence the things that come out of their mouth.

In Ephesians 4:29 Paul wrote: “Let no unwholesome word proceed from your mouth, but only such a word as is good for edification according to the need of the moment, so that it will give grace to those who hear.”

The word “unwholesome” carries with it the idea of decay or something that is rotting. Not things we would want to come out of our mouth. Yet, many allow these things to become an everyday part of speech. And perhaps you are thinking to yourself, “I don’t use foul language and I never will.” And you may be right. That may be something you’ll never struggle with. However, are we limiting this passage to only mean those four-letter-words that would have gotten our mouths washed out with soap as a child? Paul not only tells us the kind of things NOT to say, but he goes on to explain what our speech SHOULD look like. The things we say should be “good for edification.” That rules out lying, inappropriate jokes, gossip, taking the Lord’s name in vain, cursing and the list could go on. So rather than focusing only on the things we shouldn’t say, we should strive to make sure that the things coming from our mouths are wholesome. Do the things we say seek to edify and build up those around us?

Someone once told me, “If you don’t have anything nice to say, don’t say anything at all.” Instead, if we can’t find anything nice and wholesome to say, maybe it is time to re-evaluate the way we communicate rather than simply keeping our mouth closed.

When Sin is OK

If you’re like me, you’re wishing you had put on your steel toed boots because this issue steps all over your toes. However, it is a serious issue that needs to be addressed. If you turn on the television to almost any network, it won’t be long before characters on that particular show find themselves in sinful situations. In fact, most television shows are cluttered with sinful situations, relationships and attitudes. Were a Christian to face any of these things in their regular life, they wouldn’t hesitate to recognize it as sin. But for some reason, we find ways to justify them when they’re on T.V.

In short (as my friend Tony Johnson said), we need to think Jesus…even when it comes to television. 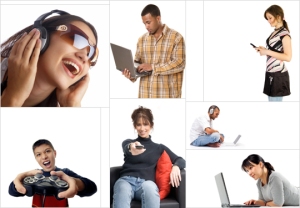 As you walk in, you begin looking for the perfect seat. As usual, you’re not quite sure what to expect during the next two hours. Will you laugh? Will you cry? Will your emotions be stirred? Are you going to walk away excited? You don’t know. Everyone begins to quiet down as the show starts and you begin to get excited. You are here to be entertained.

As you read the last paragraph, perhaps you imagined yourself sitting in the middle of a crowded movie theatre. Or perhaps you were waiting for the start of a new play or an exciting concert. Unfortunately, this is actually a description of many Christians as they walk into worship each Sunday morning. They come for one reason and one reason alone: to be entertained! We live in a world that constantly searches for entertainment. We go to the movies, watch television or attend concerts because we like to be entertained. And sadly, this way of thinking is creeping into our worship of God as well.

Worship, though it can be encouraging for Christians, is not for us! It is for GOD! Yet there are many churches who are constantly searching for ways to make the worship more appealing to the world. It’s as if we think the only way we can convert the lost and keep them is to find ways of entertaining them. Have we forgotten about the power of God’s Word? Or are we beginning to step away from God’s Word because we’re afraid that our worship will become “boring”?

In the book of Malachi, the Israelites were being rebuked for doing the same thing. Malachi 1:13 states that the Israelites began to find God’s way of doing things “tiresome” or “boring”. They no longer cared about what God wanted but only focused on their own well being. I’m afraid that many who call themselves Christians have started down this same path.

This is not to say that we can’t be excited about worshipping God. It’s not even to say that it’s wrong to walk away from worship feeling encouraged or uplifted. But when our purpose for worshipping God becomes mere entertainment for the “audience”, we have a problem. When we attend worship just so we can get something out of it, we are no longer worshipping God in spirit and truth (John 4:24). Therefore, the next time you come before the Lord to worship Him, make sure you’re doing it for the sole purpose of lifting Him up, not merely for your entertainment.